The signing process is as follows:
1. A document to be signed is turned into a stream of bytes.

2. The entire PDF file is written to disk with a suitably-sized space left for the signature value as well as
with worst-case values in the ByteRange array.
ByteRange is an array of four numbers. The first number in each pair is the offset in the file (from
the beginning, starting from 0) of the beginning of a stream of bytes to be included in the hash. The
second number is the length of that stream. The two pairs define two sequences of bytes that
define what is to be hashed. The actual signature value is stored in the /Contents key between
the end of the first sequence and the beginning of the second one. In Figure 4, the hash is
calculated for bytes 0 through 839, and 960 through 1200. 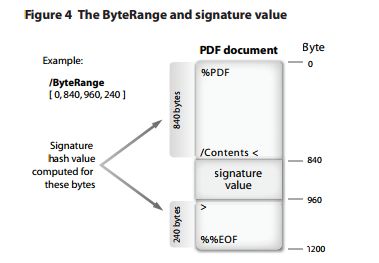 3. Once the location of the signature value is known in terms of offsets in the file, the ByteRange
array is overwritten using the correct values. Because the byte offsets must not change, extra bytes
following the new array statement are overwritten with zeros.

4. The hash of the entire file is computed, using the bytes specified by the real ByteRange value
using a hash algorithm such as SHA-256. Acrobat always computes the hash for a document
signature over the entire PDF file, starting from byte 0 and ending with the last byte in the physical
file, but excluding the signature value bytes.

5. The hash value is encrypted with the signer’s private key and a hex-encoded PKCS#7 object
signature object is generated.

7. The PDF file is re-loaded in Acrobat to ensure that the in-memory and on-disk versions are identical

Did you find it helpful? Yes No

Send feedback
Sorry we couldn't be helpful. Help us improve this article with your feedback.